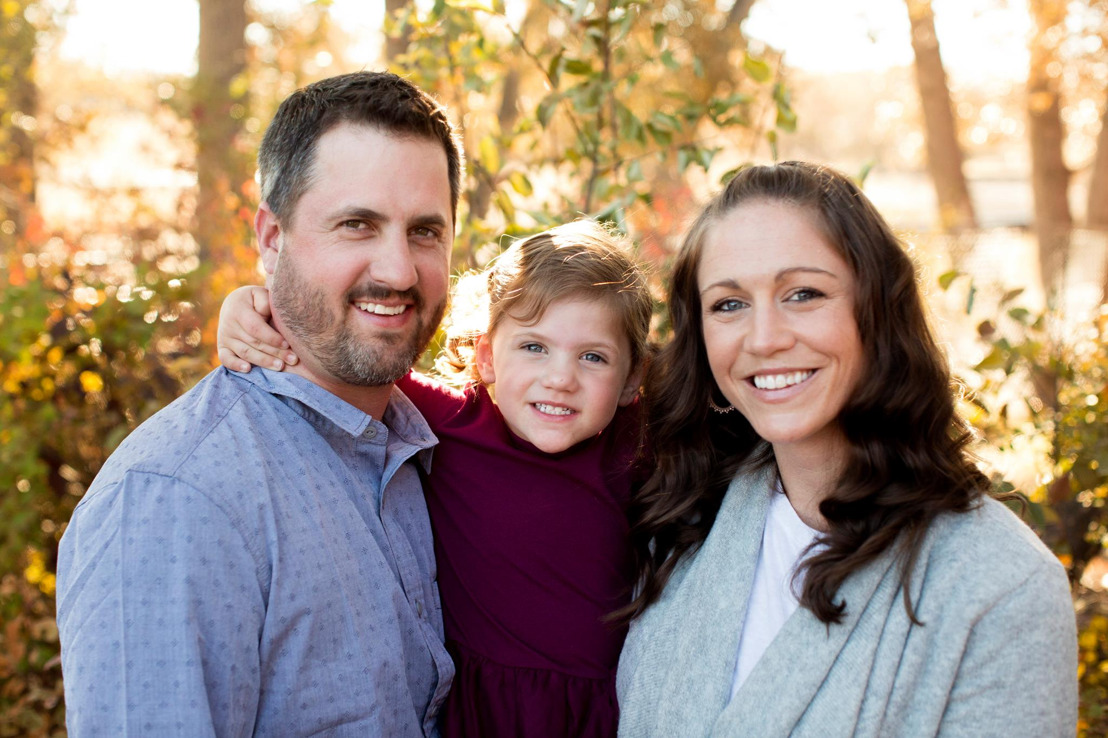 Early 2016 was a joyful time for Matt Arensdorf and his wife, Jennifer. The newlywed couple were acclimating to life as parents, after welcoming their first child, Grace, into their family.

Soon after, Matt began to notice changes in his peripheral vision. A visit to the ophthalmologist allayed Matt’s concerns about his eyesight, but raised new questions. He was told his eyes were fine, but that something else was amiss.

A follow-up appointment with a neuro-ophthalmologist would lead to the discovery of a tumor on his pituitary gland. Further exploration revealed an “uncountable” number of tumors in his brain. Initial scans strongly suggested that these tumors were metastases and not brain cancer. In just days, however, Matt, a 32-year-old never-smoker with zero history of cancer in his family, was diagnosed with Stage 4 non-small cell lung cancer.

As luck would have it, the week of Matt’s diagnosis was incredibly busy. A Surety Bond Underwriter in Denver, Matt remembers the “bigwigs” coming to town within days of learning of his disease. In self-described “typical guy fashion,” Matt powered through, moving from meetings to chest scans to dinners to doctor appointments and back. (P.S., Matt has continued to work full-time since his diagnosis!)

After a number of incredibly fortunate events, Matt found himself under the care of a lung cancer specialist, also called a thoracic oncologist. His thoracic oncologist, well-versed in the vast and rapid advancements in lung cancer research, immediately ordered Matt’s tumor be tested for the ALK mutation. When the results came back positive, a treatment plan of targeted oral therapy was quickly put into place.

Just one week after his initial visit to the ophthalmologist, Matt was correctly diagnosed, found a thoracic oncologist, and began targeted oral therapy. Furthermore, Matt remembers learning more about cancer, targeted therapies, and whole brain versus SRS radiation than he thought possible.

“I was so lucky to be put in the right hands. My doctor never talked about a prognosis, rather he talked to us about every lung cancer patient having their own story, their own path. Lung cancer, he told us, can be treated not as a death sentence, but as a chronic disease.”

Today, Matt feels great. He and his wife are thriving in their careers, he feels strong, and he is enjoying watching his daughter grow up (three-year-old Grace has her daddy in the palm of her hand!) While he stops short of considering his diagnosis to be a blessing, he does credit it with increasing his motivation and drive to make things happen. After coming to the heartbreaking decision to not add to their family (citing the risk of birth defects due to his medications and the morality of bringing a child into the world with an ailing parent), Matt and Jennifer make sure to take a fabulous family vacation every year.

The fact that Matt is stable a full three years following his diagnosis of stage 4 disease speaks to the remarkable advances in lung cancer research.