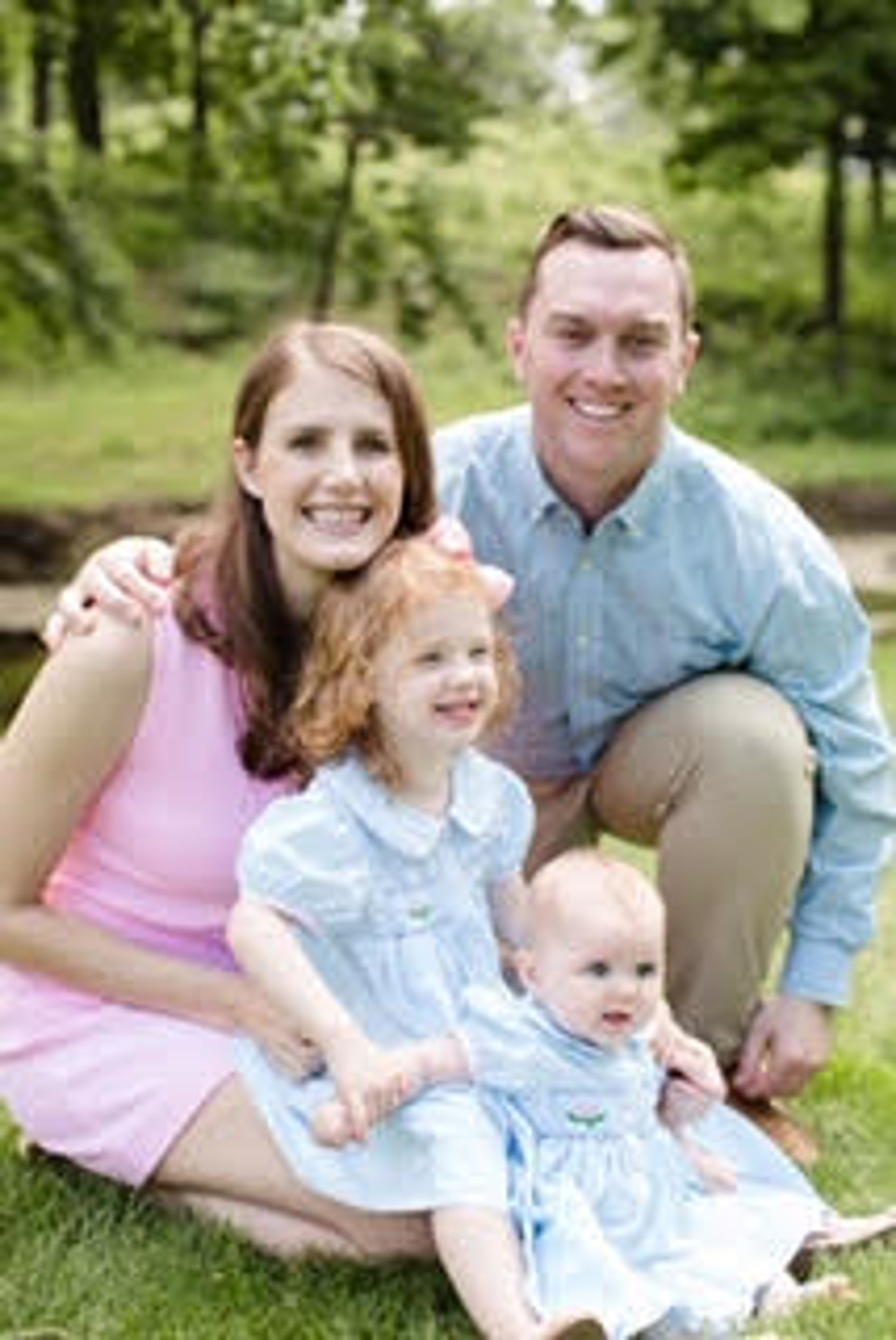 In late August 2018, 29 year-old Elizabeth Moir was 8 months pregnant with her second child. Her pregnancy had been fairly routine except for the fact she was not gaining much weight. Unconcerned, both she and her obstetrician chalked it up to her Crohn’s Disease. When chest pain and shortness of breath brought her to the emergency room, a chest x-ray indicated that she had a calcified granuloma in her lower left lung which is nothing more than a benign irritant. She was sent home with instructions to take things easy. Although the pain initially got worse, it eventually subsided.

In October, Elizabeth gave birth, making her 2-year-old daughter Campbell a big sister to newborn Eleanor. She and her husband – and high school sweetheart – Michael settled in, adjusting to life as a family of four.

From Coughing Up Blood to Adenocarcinoma

By April 2019, Elizabeth had developed a cough. She recalls commenting to her mother that she thought she might have pneumonia. Later that day, after doing a quick 15-minute ride on her Peloton bike, she coughed up blood. Alarmed, she saw the doctor the following morning and was diagnosed with bronchitis.

The coughing stopped for two days. When she once again coughed up blood, she returned to the doctor. Because her lungs sounded okay, the doctor believed it was merely “new baby” fatigue, but performed a “just to be safe” x-ray. There was fluid in her lungs along with a nodule.

Soon thereafter, Elizabeth met with a pulmonologist. Because the CT scan showed enlarged lymph nodes, fluid in her lungs and the nodule, the first order of business was to rule out a blood clot, so they performed a bronchoscopy. The doctor told her not to worry, that it was highly unlikely that this was a lymphoma. The results would say otherwise. Elizabeth, a 29 year-old, healthy and athletic mother, who had never smoked had adenocarcinoma of unknown origin. Soon they would determine it began in the lung.

As is standard protocol with lung cancer patients, Elizabeth underwent a brain MRI and PET scan which revealed a colloid cyst in her brain. The cyst – causing hydrocephalus – was completely unrelated to the cancer, yet it was a medical emergency that took precedence over any cancer treatment.

Elizabeth vividly recalls her doctor’s reaction to the PET scan:

“This is not good. We will try everything in our power, but we are no longer talking about a cure.”

Now, a mere eight days after receiving a lung cancer diagnosis, Elizabeth endured brain surgery which included having a right ventricular shunt placed, along with a permanent drain from her head to her abdomen. She then had to recover for two weeks before it would be medically responsible to begin treatment for her lung cancer.

After getting a second opinion and undergoing a liquid biopsy, Elizabeth would learn that she is ALK+ and is currently on oral chemotherapy treatment. In the three months since starting the medication, the disease in her lungs, lymph nodes, liver, spine, pelvis and rib cage are, with the exception of a small spot on her tailbone, completely resolved.

A Commitment to Advocacy and a Full Life

“No one ever said Stage 4, but it is. I don’t have time to feel sorry for myself. Most days I can get up and not think about it much. But there is life before and life after. I’ve learned that we never know how lucky we are. My kids will never know anything different than my having lung cancer. They’ll see me fighting and strong and living so they won’t be afraid.”

In the months since her episode of coughing up blood and lung cancer diagnosis, Elizabeth has learned more about lung cancer than she ever expected to and is disheartened by the tremendous funding gap. Her goal is to change that in whatever way she is able, beginning with advocacy.