It was nearing the end of the school year when 40-year-old music teacher Shelly Engfer-Triebenbach found herself so winded and out of breath that the walk from her classroom to the school office became arduous.  A colleague urged her to see her doctor. Shelly was diagnosed with pneumonia and prescribed antibiotics and an inhaler—she was instructed to return in a week for follow up. Overnight, however, her symptoms worsened, prompting a sooner-than-planned return visit to the clinic.

As luck would have it, there happened to be a pulmonologist on-call.  He ordered a chest x-ray, which would reveal the cause of Shelly’s shortness of breath–significant fluid around her heart.  Immediately following the procedure to remove the fluid, Shelly was relieved to feel like herself again. A week later, however, she would learn that the fluid around her heart was rife with malignant cells. Shelly had Stage 4 non-small cell lung cancer and was told that she had six months left to live. This mother of two young children was having none of it.

As a never-smoker and with no history of lung cancer in her family, Shelly’s diagnosis came as a complete shock. By her own admission, she spent weeks in denial. Until that is, she sprang into action.

When the testing to determine if she carried either the ALK or EFGR biomarker both came back negative, something did not feel right. Knowing the value of a second opinion, Shelly sought out a second and then a third consultation.  A full three months after her initial diagnosis, Shelly would learn that she was indeed ALK-positive. It was then that she knew that she had to listen to her gut, stay strong, and become a fierce advocate for herself in the face of lung cancer.

It has been nine months of chemotherapy, two clinical trials, and five years since Shelly was told that she has six months to live. Shelly shows no evidence of disease (NED) from the neck down and is considered stable despite one metastasis in her brain. She credits her positive attitude, and her self-advocacy with the fact that she can still be found riding her motorcycles with her husband, or golfing and playing tennis with her teenaged son and daughter.

“My priorities shifted.  I had been very career oriented even working on moving from the role of teacher to administrator, but then I looked at my life and knew I wanted to spend more time with my kids.  I replaced music conferences with lung cancer conferences. One thing I learned: if you are not at peace with your diagnosis or treatment, seek out other options."

The value of a second opinion when dealing with lung cancer should never be underestimated. Shelly’s determination to advocate for herself throughout her journey with lung cancer inspires her family, her fellow lung cancer patients, and the larger LCFA community.

Shelly now spends a lot time as a patient advocate with an ALK biomarker patient group, and through her work with Lung Cancer Foundation of America's Hope With Answers project. 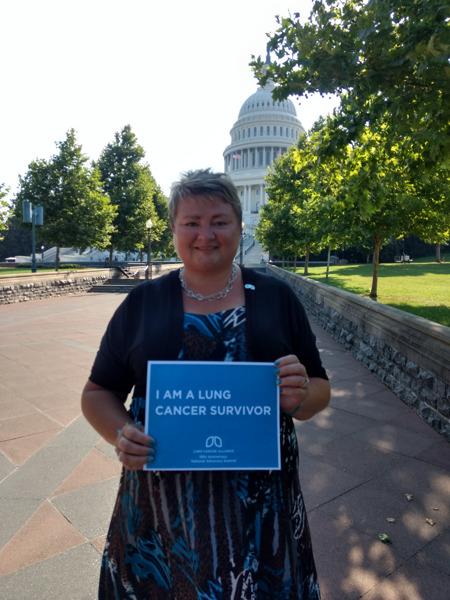